Notice: You are currently using an out-dated browser. Some content may not display correctly. Please consider updating your browser.

Known for craftsmanship. Appreciated for durability. Envied by marching bands nationwide. The legacy of these high-end, custom-fit and flexible garments is rooted in 100 years of tradition, adding to the experience of all musicians who’ve dawned one of our uniforms. 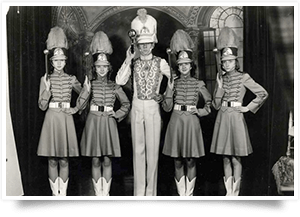 Before the Internet, reality TV and actual television, there was Herman Fruhauf. It all began with him creating ceremonial dress for lodges and fraternal organizations in the early 1900s. When his son, Ludwig, followed suit, he combined his passion for music and art, designing uniforms that were often duplicated but never bettered. This commitment to individuality continued with Ludwig’s son, Fred, who passed the family business on to his sons, Kenneth and Richard.

Built on the expertise of four generations, Fred’s sons carry on the legacy, leading factory trained sales and production staff. 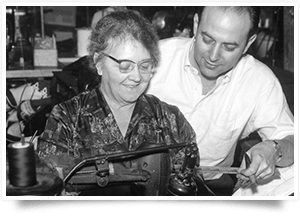 As this tradition continues, Fruhauf Uniforms are the only multi-generational, family-owned, band uniform manufacturer in the country. Guided by artisan craftsmen and intertwined with the history of band uniforms, from design to delivery, we ensure excitement and satisfaction with every garment produced.
Since 1910, the Fruhauf family has manufactured the highest-quality music education apparel. Four generations later we’re better than ever, and continue to use the highest quality of materials and workmanship.